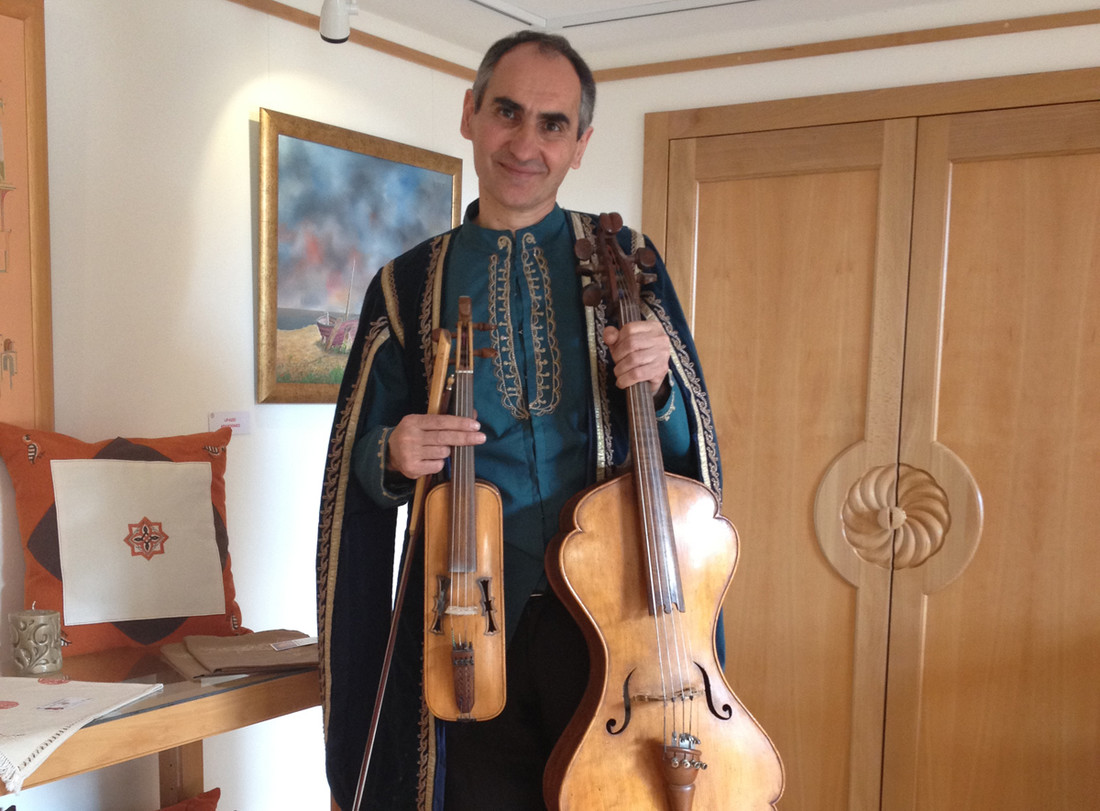 Manouk Haroutyunyan’s studio is comprised of two small rooms. One can smell the aroma of wood, resin and something else which reminds of the scent of newly cut grass. A large carpet hangs on the wall, a smaller one served as a couch for instruments which are everywhere with revived souls.

On the whole Manouk Haroutyunyan gives a second life to the instruments- he restores them and the instruments which were broken and unnecessary yesterday today seem to be shining in vivid sounds. Besides, Manouk likes to receive guests and he often plays to rejoice their hearts. That very day nice surprises were in store for us. Placing before us the cups of aromatic coffee with steam rising from them he took a thoughtful look over the studio, then his gaze stopped on the shelf where shvi (flute-like instrument) was lying… The calm and sorrowful melody reminded us of immense mountaintops hundreds of kilometers away and the stars which are hanging so low above your head when you are in the mountains. "And now a little bit of eastern colours!-with these words he took a large tambourine from another shelf covered with white semitransparent skin on which Scheherazade was painted with light graceful strokes.
The melodious sounds blew a mirage of a tent lost in the burning sands and a wonderful odalisque dancing her unique and peculiar belly dance in the flicker of candles…The tambourine fell silent abruptly, while one could still feel the sharp eastern charm…"
"And where is your ‘creation’ Manouk," we asked him.
"You want to listen to ‘Man Jut’? Certainly"
How could one reject the pleasure of listening to the sounds of this instrument which was made according to the scheme by Manouk Haroutyunyan and which the author himself gently calls ‘Man Jut’? The instrument resembles a cello but smaller in size and sharp angles which are peculiar to the form of the cello, Manouk suggested smoothing it out: in the result a delicate creation came out with rounding forms and amazing sound.

"This instrument reminds me of a woman - a slightly sad, passionate, tender and charming woman," says Manouk.
The timbre of ‘Man jut’ is singular; it has both the dreary moaning of the kamancha and muffled tenor of the cello and the passionate tenderness of the violin.
"Wonderful craftsman Hrant Shtikyan, who made this instrument according to my scheme, got a singular sound… The reason is possibly the fact that for making the finger-board he made use of a piece of wood which his grandmother had brought from Turkish Armenia far away. Therefore the sound is so unusual, as if it has absorbed the whole sorrow and hope of an Armenian."
Yet, what exactly disclosed the whole fascination of Armenian folk instruments to Manouk, who had graduated from Academy of Music, department of cello?
"All the things that have happened to me up to now, the places I have been to and the people I have worked with may serve as an answer to this question," he says.

"Gradually I started to discover the richness, the beauty of the sound and the great variety of our folk instruments… I traveled over the whole Armenia and each trip disclosed to me new layers both in music, and psychology and the spirit of the nation, which is so important for playing folk music. I cherish a dream to found a museum of Armenian folk instruments, to gather them from all over the country, from the most remote mountain villages," says Manouk.
"You know," says Manouk, "every instrument is a unique mystery. You see this pipe? It is light, smells like flowers, it is made of scorched cane. And now listen to its sound. Can you hear it?" I heard a tender trill.
"Do you hear? It tells me about the stillness of a summer evening.
As to duduk, its tune reminds me of a long desert road leading to distant countries and pomegranate gardens in the desert (I immediately recalled William Saroyan). So similarly every instrument can tell its story, if you manage to hear."
We were leaving Manouk Haroutyunyan’s studio regretfully, one wishes to listen to the musician for ever, who was telling about instruments and no doubt one also wishes to take away a part of the warmth that he put into his play -- the sadness and serenity of his shvi, the passion and anguish of Man jut’, the muted tune of duduk… He promised to play for us again. Some day…