Khachaturian Trio – a sense of style and virtuoso performance 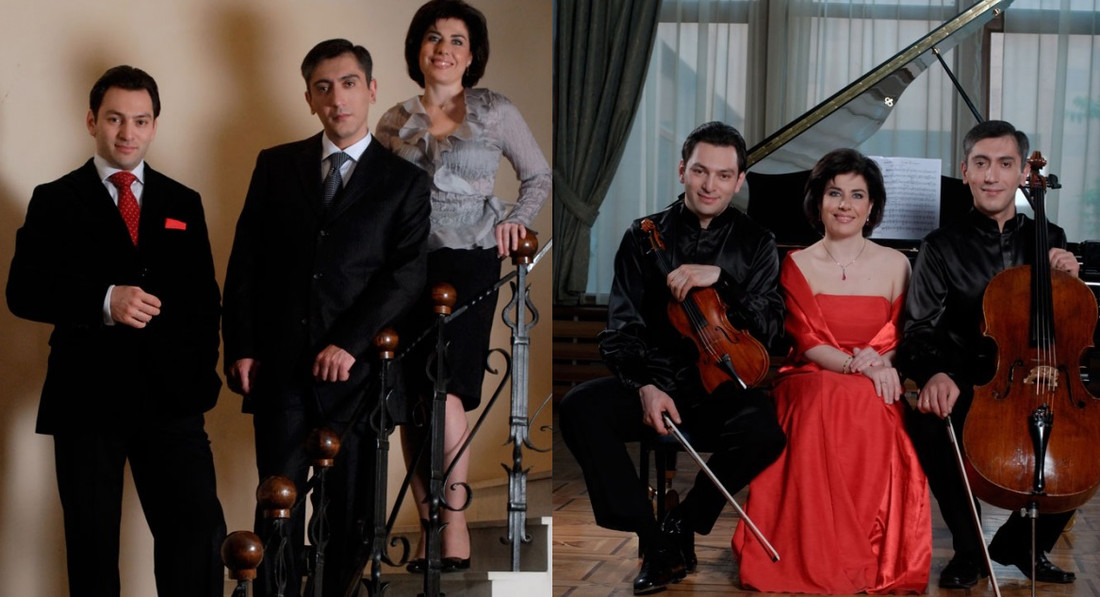 They performed in such halls, as Brahms Hall, Musikverein, Wien, Kleiner Saal, Laiezhalle, Hamburg, Mendelssohn Saal, Gewandhaus, Leipzig, Carl-Orff-Saal, Gasteig-Philharmonie, Munich. The Trio has participated in a number of prestigious festivals, the Festival de las Artes (Costa Rica), Festival International Cervantino (Mexico), to name a few. The Arsika Trio’s performances have been frequently broadcasted by TV and Radio. In 2008 Trio took name of an outstanding Armenian composer Aram Khachaturian. The critics have highly praised the Khachaturian Trio’s virtuoso performances, subtle sense of style, warmest sound, brilliant and deep musicality. Members of the Trio are involved in pedagogic activity by giving master classes in music schools of various regions of Armenia.
-Ms. Grigoryan, it would be interesting to learn about creative work done by Trio in 2014 and 2015?
-We recorded three new discs dedicated to Armenian music. The first disc features works by contemporary Armenian composers Vardan Adjemian, Levon Chaushian, and Vahram Babayan. The disc was released in 2014. The second disc (2015) is dedicated to Armenian classical music and includes works by Komitas, Sayat Nova, Edvard Mirzoyan, Arno Babajanian, Alexander Harutyunian, and, of course, Aram Khachaturian. The works are performed by Trio’s musicians. The disc was released thanks to Asatur Gyuzelyan, a London-based sponsor. And the third disc, which was also released in 2015, is called “Aram Khachaturian. Chamber Works”. It is a double disc and aims to present Khachaturian to the listener in a role that many music lovers may find somewhat unusual as Khachaturian is known to the general public as the author of large-scale works such as symphonies, concertos, and ballets… Yet the composer’s chamber works that he wrote throughout his life are insufficiently known to the public at large and remain little-studied by music experts. The disc includes "Cradle Song" for Piano Trio (1926), Suite for Viola and Piano in 2 Movements (1929), Suite for Two Pianos (1944-45), Sonata for Piano (1961) Sonata-Fantasia for Cello Solo (1974) and others. Among the musicians involved in the disc’s recording were the musicians of the Trio (the author’s note: Armine Grigoryan, Karen Shahgaldyan and Karen Kocharyan), as well as Maxim Novikov (viola) and Sona Barseghyan (piano). Maxim Novikov has lived in Yerevan in the last two years, collaborating as an audio operator with the Trio.

-“Aram Khachaturian. Chamber Works” is not quite an ordinary disc, is it?
-Exactly. It is a double disc, and we also added an insert booklet that includes rare photos of Aram Khachaturian from the archive of his House-Museum and reveals some little-known facts of his biography. By the way, the presentation of the disc was attended by Olga Kuzina, the granddaughter of the great composer. Ucom Company assisted us with the release of the disc. All our discs can be purchased in House-Museum of Aram Khachaturian.
-What about your tours in 2014 and 2015?
-In 2014, the Trio gave concerts in Germany, Russia, Great Britain, the United States, and, of course, in Armenia. 2015 proved an eventful year. There were concerts across Armenia – we want to bring joy to our Armenian audiences through music, while tours in foreign countries – Germany, Britain, Russia, Latvia, and Japan – began in April and concluded with a concert in Spain - Lanzarote, the Canary Islands, where we performed at the classical music festival on December 5-13. Each of those concerts had its own peculiarities and emotional charge and drew a particular audience.
-You are probably already planning your performances in 2016…
-Right now I can only tell you about Trio’s concerts in the near future. A concert to mark the 95th anniversary of famous composer Arno Babajanian’s birth took place on February 27 at the Small Hall of Moscow State Conservatory. The next country we will be touring is Germany where concerts will be held in late April: concerts are due in Geretsried on April 21, in Berlin on April 22, and in Hamburg on April 23-24. Then we are scheduled to perform in Russian cities of Kovrov and Petrozavodsk on April 27 and 29. As regards other performances, negotiations are still underway, and it is too early to speak about them.

-Trio has also founded the Classical Music Development Fund. Could you please tell us about the Fund’s purposes and plans?
-In 2014, for example, 70 concerts and 25 master classes were organized as part of partnership aimed at popularizing classical music in Armenia and outside it.
The concerts were attended by over 15,000 spectators, while master classes attracted 150 pupils and students of music schools and higher educational institutions.
The Fund cooperates with various music schools and has scholarship holders, and the Trio’s musicians supervise gifted pupils.