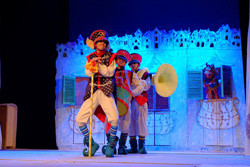 Yerevan State Puppet Theatre was founded in 1935, June 1. Օn July 5, 1935, by efforts of theatrical troupe led by Hasmik Gyozalyan , S. Obraztcov Puppet Theatre-studio graduate, the theatre staged its first performance based on the fairytale “The Dog and the Cat” by the Armenian great writer H. Toumanian. The following people were among the theatre founders: director, also an actress Sofya Bejanyan, artist Gevorg Araqelyan, tutor Maruqe Durgaryan, actors Pavlos Boroyan and Araqsya Arabyan. Varya Stepanyan was the first director of the theatre. Pavel Yashin, actor and artist at the Moscow Central Puppet Theatre (staged “Kashtanka” by A.Chekhov, 1936), as well as Boris Shunayev, director and composer at Saint-Petersburg Puppet Theatre (directed “Puppet City” by E. Schwartz, “Guliver’s travels” by J.Swift, “Don Kihot” by Cervantes) have their immense investment in the creation of a professional school for directing puppetry and preparing actor-puppeteers. From 1939 to 1948 a troupe from Russia was working in the theatre under the leadership of B. Shunayev. 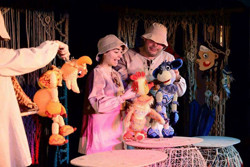 These famous people have their inestimable role in the history of the Puppet Theater - the distinguished director of the Armenian stage Levon Qalantar ("The Chakh-chakh King" by H. Toumanyan, 1938, “Tale of Tsar Saltan” by A. Pushkin), director Tigran Shamirkhanyan (“The Thinreed” by Gh. Aghayan, 1940,) artists Kh. Yesayan, S. Stepanyan, V. Tevanyan, A. Sargsyan. The theater has been located in its current 4 Sayat Nova street address since 1975. It contains two stages – a big one with the capacity of 300 seats and a small stage with 60 seats. The renovated stages are supplied with all the contemporary sound and light equipment necessary for staging modern performances of wide and different styles. 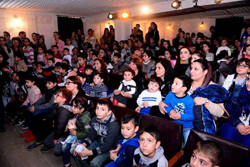 The theatre is actively participating in many international festivals geographically stretching from India to the USA. These following directors are worth mentioning for having their remarkable role in contributing to the international recognition of the theater - Manya Aslanyan, Yervand Manaryan, Ruben Babayan, Narine Grigoryan, Larisa Mangasarova and Zaruhi Antonyan. Since 1998 Professor Ruben Babayan, Honoured Worker of Art of the Republic of Armenia, is the director of the theatre. The chief artist is Honoured Artist of RA Anzhela Galstyan. 35 actors are included in the puppet theatre troupe. The Yerevan State Puppet Theater holds within its building a unique in its style in Armenia and rich museum of puppet art, named after its founder Pavlos Boroyan.