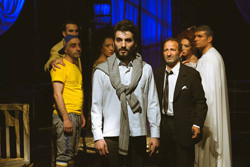 Ara Yernjakyan is the founder and artistic director of the Yerevan State Chamber Theatre. The word "Chamber", written on the posters and billboards is meant to emphasize the theatres atmosphere of simplicity, as if everything is happening in a single chamber (as a rule, there are only a few actors in a performance) and, at the same time, the theater is not bound by any specific direction. Tragedy, drama, comedy, musical performance: all forms of theater are accepted. As for the symbol, the double face represents the actor and the audience joined with the mathematical sign for equality, which it is a tribute to the Identification System, which, as already shown, has become the basis of the Yerevan State Chamber Theater. 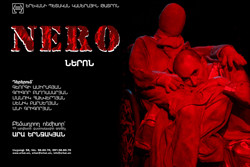 Throughout its existence the Chamber Theater has presented more than 50 performances, which are well-known and popular not only in Armenia, but also outside its borders. Today the Ara Yernjakyan’s artistic crew consists of well-qualified professional artists with knowledge of all secrets of their art. All of the artists are very enthusiastic, dedicated to the theater and are able to think creatively on the stage. Famous artists such as V. Stepanian, Yevg. Podpomogova, V. Chaldranyan, M. Poghosyan, H. Tokhatyan, B. Livshitse, M. Avakimov, A. Ambartsumyan, K. Ulikhanyan, M. Mazmanyan, Q. Zaminyan, M. Zaminyan, A. Laray, A. Mikaelyan, A. Zotov, D. Babayan, Z. Uzunyan, A. Ghukasyan, G. Sekoyan and others, have been a part of the Yerevan State Chamber Theatre's stage. 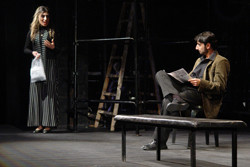 As a rule, Yernjakyan designs his performances himself, but at the same time, he has collaborated with renowned painters V. Podpomogovi, R. Sahakyants, F. Eghiazaryan (author of the symbol of the theatre and the decorative mural of the hall), B. Petrossian, who formed theater's main entrance and created the "spectator". S.Kazarian, (who created the sculptures of musicians in the Blue Hall), L. Avetisyan, Yevg.Safronova, R. Khachaturian. Among the musical directors of the Chamber Theatre, throughout its existence were A. Aharonian, G. Khachikyan A. Kartalyann with his jazz band (A. Usnunts - saxophone, R. Barkhudaryan - cello, Alexander Grigoryan - drums), V. Hayrapetyan. From one performance to another the Chamber Theatre proves the fact that we are visiting a theater that has reached a high level of professionalism and is bringing a fresh breath into the theatrical stage.