Kh. Abrahamyan, "I do not want to set boundaries between branches of art..." 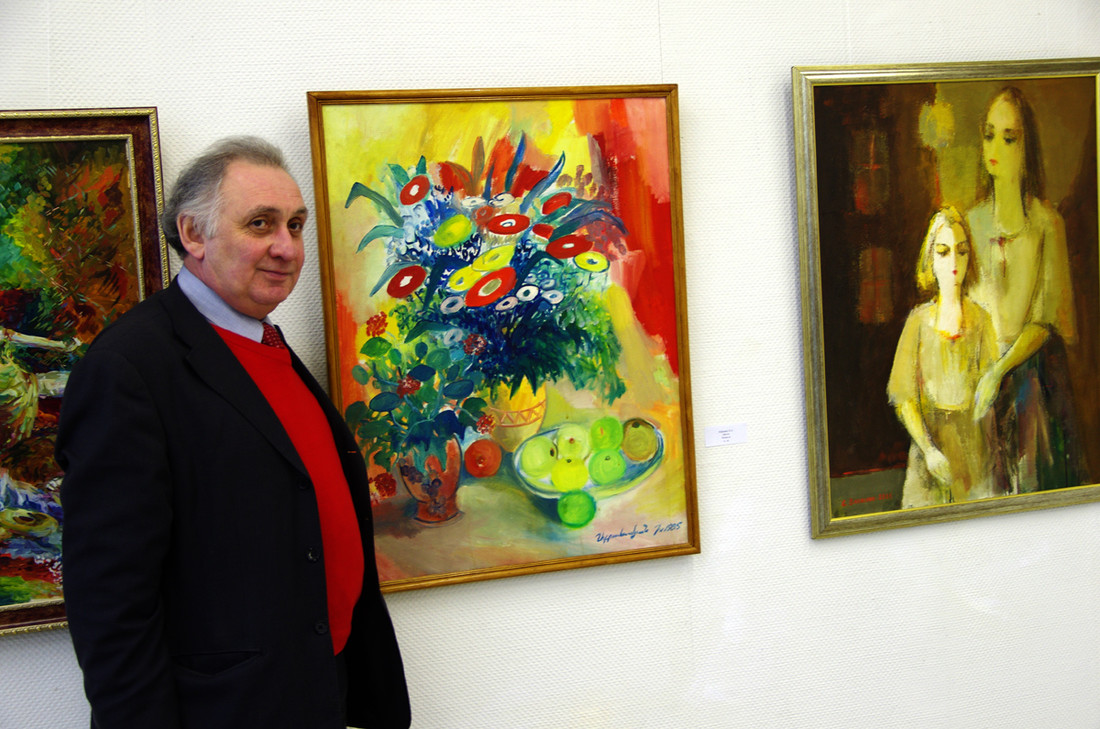 Khachik Abrahamyan, a famous painter, architect, designer is culturally cultivated and each of his paintings is special, like that of any really talented painter. Therefore, looking at his paintings, one can feel something unique and catching - his paintings excite and speak to you.

And they tell you about themselves in many sounds, lost in the tumult of paints, in the whirlwind of movements, stopped by the brush of the painter. Abramyan is an artist of worldwide fame: he is a master of graphic art, oil paintings, monumental art, portraits, landscapes, he is also an architect and designer. He was born in 1960, graduated from art and theatrical Institute. Since 1984 he has taken part in numerous exhibitions all over the world. He is also a skilled public figure who created and headed the Center of painters-Armenians, organized a number of exhibitions of painters-Armenians from Armenia and abroad. Abramyan's works are exhibited in many museums of the world, in the galleries of Russia, Baltic republics, Germany, Italy, France, USA, Canada, Austria, Sweden, Norway, Switzerland, Japan, Egypt, Kuwait, UAE, Syria, in private collections and foundation of the Ministry of Culture of Armenia.

In 1992 Kh. Abramyan becomes a member of the Artists' Union of Armenia, since 1994 he has been a member of the International Association of Artists of UNESCO, France. Since 1995 - a Member of International Federation of painters of Russia, 2009 - A member of Artists' Union of MOAU, Moscow. Kh. Abramyan has been awarded with a number of charters of honor, medals and orders such as: the Medal of Armenian-Egyptian Friendship(Cairo, given by the ambassador of Armenia to Egypt); "Talent and Vocation" Medal of Alexi II- Patriarch of All Russia; "Talent and Vocation" Medal of the "Peacemaker" world Charitable Alliance, etc. For about two years Kh. Abramyan has been cooperating with the Ministry of Culture of Italy; in 2010 in Italy (Naples) the biggest exhibition of painters-Armenians will open. Over twenty years the artist lives and works in Moscow, visiting Armenia from time to time.

-How can you define the expression ‘a genuine painter’?
-Painting is not enough in order to be a painter. It is not enough mastering techniques perfectly. The combination of the soul and mind, feelings and emotions, desires and the talent of seeing through the world engenders in the painter the ability of not only painting but also speaking with the help of paints. The paints come to life at that time.
-What source do you draw your inspiration from?
-Beauty is that source, which can be perceived everywhere -in a falling leaf, a snow-covered tree, a withered rose (dreary beauty), a sleeping child…Beauty is in life itself and I never look for it intentionally.
-What genre do you prefer in painting?
-I cannot say that I am painting in one specific genre. In my painting there is no clear-cut boundary between styles and genres…Depending on the idea of the painting I paint it in this or that scheme. Sometimes or even frequently styles and genres penetrate into one another and may be combined in one painting. Here the idea that the painter wants to express is more important ; maybe abstract strokes express one idea in his painting, graphics expresses another, postmodernism embellishes all the others and so on.
-Painting and music are different incarnations of one and the same thing. What kind of music do you hear in your paintings?
-I get excited by the enigmatic beauty of ancient civilizations; I am interested in the past, especially in the distant past. So that, if I make an attempt to express my painting through music it will be the music of many epochs…Bach, Mozart, Beethoven, Komitas, Khachaturyan, gusanakan songs (minstrel songs)…or else the music of Ancient Greece and Babylon, sorrowful tunes of Venetian gondoliers or carnival music…or possibly modern eclectic music…
-What branch of art, besides painting, is after your heart? Where else would you like to realize your creative potential?
-I do not want to set boundaries between branches of art. Music, stage art, cinema, and architecture-all these are interconnected in our lives. I would shoot a film with pleasure both a feature film and a documental one. I believe that the future cinematography is in the hands of film directors who have professional artistic education. Just imagine how far the combination director - painter will enlarge the man’s creative potential, who is shooting a film…That will be quite another film…the film of the future.